Travel Clinics of America is your best choice for receiving high-quality pre-travel care, sound travel advice, and peace of mind. 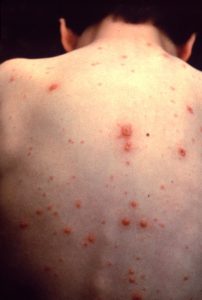 Chickenpox is a highly contagious disease caused by the varicella-zoster virus. It is considered primarily a children’s disease. Once a person is infected, it is highly unlike he/she will be infected again, but rare second cases have occurred. The virus can remain dormant within the body and emerge decades later in a new disease form called zoster, commonly known as shingles. You cannot develop shingles unless you have been previously infected with the chickenpox virus.

How is chickenpox spread?
Chickenpox spreads easily from person to person through sneezing and coughing or sharing food and beverages. Touching a chickenpox blister can also transmit the virus. Like many viruses, the infected individual can spread the virus before any symptoms or rash have developed. If you are in close contact with a person with chickenpox, and you are not immune to the disease through previous exposure or vaccination, then you are at risk.

What are the symptoms of chickenpox?
Initial chickenpox symptoms are similar to many viral infections. Typically, there is fever, headache, and sore throat. A day or two later, the chickenpox rash develops. This is a blistering, often itchy, rash over the body with new lesions appearing for up to a week. Once the blisters have crusted and dried, they are no longer infectious.

How is chickenpox diagnosed?
The diagnosis is based on your symptoms and the distinct chickenpox rash. No special blood tests are needed.

Is treatment available?
There is no treatment for chickenpox. Fluids are encouraged and medications may be recommended to lower fever and to reduce itching.

Can chickenpox be prevented?
Yes, chickenpox can be prevented by an effective vaccination. Chickenpox vaccine is administered in two doses to young children or to adults who are not immune to the disease.

Do international travelers need to be protected?
Yes, chickenpox occurs all over the world. Travelers should be up-to-date on all their routine vaccinations, including chickenpox, unless they are felt to be immune to the disease. Even routine diseases, such as chickenpox, can strike travelers abroad. It is important to meet with your Travel Clinics of America physician to review your medical and vaccination history in detail prior to your departure.